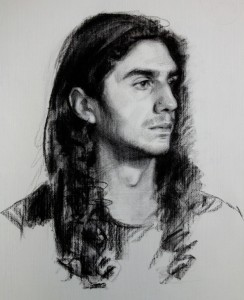 Probably my best charcoal portrait drawing to date. This didn’t start to come together until late on in the third day, when I got really frustrated with it and threw caution to the wind. At this point I quite roughly started to reinforce shadows shapes and the tone of the hair – making alterations to the placement of the ear and back of head. As these things went in, it became easier to see the shapes more accurately, and realise that things were closer than I thought.

The contour of the lower half of the face was probably the most difficult to put in, but it got there eventually. The downside in taking so long to lock in the shapes, is that my constant putting in and taking out left the paper quite scarred. Fortunately the worst places are in areas of shadow and halftone, so are not too obvious unless you’re looking for them. The main problem I found is that as the surface of the paper became a little fuzzy, it was difficult to create a sharp line if required. For example, I wanted to put the earring in with a simple sharp thin line. No chance!