After too much fussing and tweaking, I have finally reached a resolution on this larger still life painting that I started before Christmas. It was an organic-ish composition whose foundation item was the brown bag.

On the day that I went to a vintage fayre and bought the little white jug, I also bought some cakes (carried home in the bag). I was unpacking my items in the studio and really liked how the bag was crumpled and the way that the light hit it. Really I wanted to paint a study just of the bag, but it seemed a little too minimal. I added the jug and began – becoming increasingly interested in the looming shadow behind. As the lay-in went on though, it became obvious that a pop of something else was required and so the trusty satsumas (and the excuse to buy some new Cadmium Orange) were added to the mix.

On reflection, I think the whiteness of the jug is too stark and some patterned ceramic might have been nice to try. Still, the flatness of colour made for an interesting challenge in shaping the form with nuances of light and shade, and suggesting the texture of glaze through subtle brushwork. Seen as a whole the painting looks more highly rendered than it is up close. I tried to keep the paint broad and to make every stroke count without going over and over it again. I wanted edges to be soft but not sloppy, and to let some airiness come through in areas where the paint is thinner and the canvas beneath can be seen. I include a couple of detail shots in which I hope those things can be better seen.

So, time for a good dry, a unifying varnish, and on to the next. 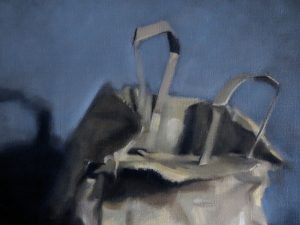 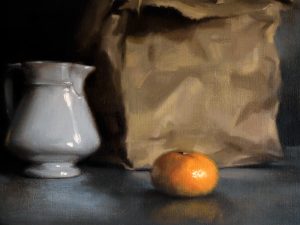